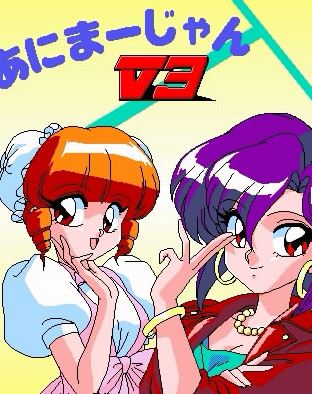 1993, the year Animahjong V3 was released on PC-98. Made by Sogna and published by Sogna, this movie is based on strategy game.

In this pre-Viper game by Sogna, an elderly mahjong master with no sons seeks a male successor. When he discovers the protagonist, he offers him one of his three daughters for a wife. His daughters, Rumi, Miyabi, and Yumika, disagree because they’ve never met him, so the old man suggests they play strip mahjong with him in order to get to know him. Since they are all skilled mahjong players, they think they will embarrass him and agree.

Like Sogna’s later games, Animahjong V3 features high-quality animation during the strip scenes. The characters return in the sequel animahjongX