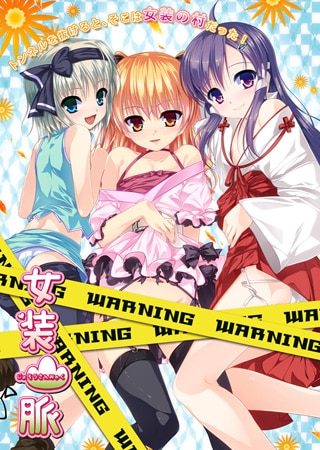 A small village in a mountain ranging from civilization.
A few hundred years ago, many young men died of plague in the village, and they were in danger of extinction.
Since then, the psychic gods will not bring young people ‘s soul,
it will become possible for a boy to spend in girls’ dress.

And modern times.
Still, that tradition was inherited, the heroines grew up as girls,
living without being able to tell the awareness as a man.

The hero who lost his way in such a village is a man of lower bounds where the heroines see for the first time.
Girls are also interested in the first time for girls to see, actively appealing.
The villagers
believed that the hero was an angel of the legendary god who came through the tunnel , and the main character is to be welcomed in the village with hospitality.

Even if I go home, the road collapses with rain and I can not pass.
It will be told that it will take one month to recover and the hero will be left behind on the isolated island of the land.
I would recommend staying in the village, and I would be encouraged to live here when I live with a girl.

It is a shy principal who is not good at girls and can not speak properly, but
girls in this village can make marvelous and natural contacts.
It might be good to get a bride in this village and fill the bones …
but it was only a great fantasy.
女装山脈