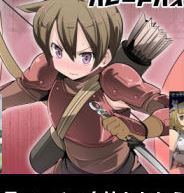 Although the hero is famous as a great swordsman,
the weak point such as the sister ‘s “Uppensen” atmosphere is not very good … has become well known as well.

Due to such a weak point that is easy to understand it will be aimed at by college female warrior sisters !

The head becomes pure white with a color scheme and it is attacked by that gap and it is made
sexual things …
Sisters want to call out and make a hero comes to stuff!

each attack also has been presented in animation.

Even if the ability difference that can beat an enemy with a single blow is attached, it is also possible for the etch attack to suffer heavy damage and to
catch up at a stretch!
おねショタ剣戟