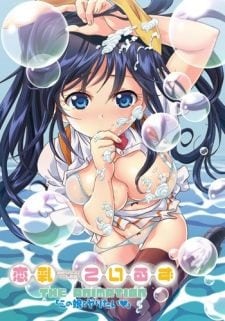 ・ “Chober!” Nya- thing Kogoro of
the cheering club called by the school director’s office.
In fact, they were suspected of having a strange relationship.
Although it was Futari to the bad pretend the relationship to the moment, … to fight serious in getting back at you for what you said
in the place you return to the clubroom, …… !! Nyako became orientation out approaching to Kogoro

, “negative × positive”
dignified Kenji is the same family-lovers lovers.
While working in the storehouse, Kenji faints after being beaten from the fence that fell from the stepladder.
When Aoi kisses Kenji who has fainted, it gives Fella to an erected meat stick.
Kenji woke up there, and he was jealous. Lust Kenji in front of such a niece …!

・ ・ ・ ・ ・ 黒
in the bathing suit shooting in the studio “Kuro Iku” .
However, YANA is criticized by the photographer for not being attractive of woman halfway.
YANA who returned to the dressing room during the break suddenly kissed Shoma, the cousin’s manager.
In fact, Yuina has always liked Shoma.
In front of YANA who explodes the thought hidden in the idol as an idol at once, Shoma can not stand it either.