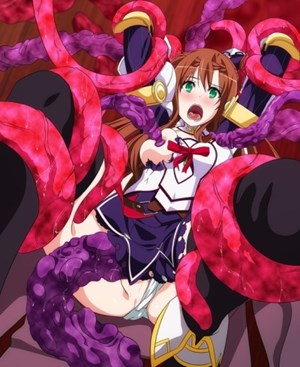 Heroes, tentacles, and eggs… The first part of the animation for this series’ 10th piece of work is here.

With the return of the Demon Lord, the demons are going rampant across the world. Leona, one of the people on a mission to defeat the demons, looks up at the sky, at the second moon that shouldn’t be there. This red moon led to the return of the Demon Lord and gives all of them more power, causing her trouble as she goes up a couple of them. In her fight, she is saved by a young man named Hein, a researcher looking into ways to deal with the demons. According to him, there is a way to deal with the demons even with them being powered up by the red moon.

To do this involves giving her body up to Hein, which Leona didn’t want to do, but…